Modern diesel engines are trimmed to a high level of efficiency, performance and environmental friendliness. Important components in this high-tech environment are the cylinder head gaskets, as developed and produced at REINZ in Neu-Ulm. They are metal/rubber composite parts. The rubber component of that compound are the seals added by injection molding. The related production technology was developed in close cooperation with the rubber injection molding machine manufacturer LWB-Steinl and the affiliated automation company LWB-Automationstechnik.

From the 1990s onwards, low fuel prices, low road use costs and driver wages and falling borders favored long supply chains between high- and low-wage countries. Especially for products with a high proportion of assembly. Since then, low-wage manual labor has been competing with cost-intensive investments in automation. But Corona crisis has shown that supply chains can be interrupted, not only in the short term, but also over a longer period of time. But this was only the climax in a process of rethinking that had already been started some time ago. Because stricter transport laws and largely applied road tolls made overland transport more expensive even before “Corona”. Which reduced the cost benefits of low-wage work and made relocation and automation investments attractive again. Not least in rubber parts production, which, however, due to the elasticity of the components, requires significantly more handling know-how than for the much more structurally stable plastic parts.

The rubber machine manufacturer LWB-Steinl was able to cover the request of the German automotive supplier REINZ for a fully automatic mounting up to 29 rubber seals on the sheet metal blanks of cylinder head gaskets by means of a injection-molding-cell.

LWB-automation competence as a project trigger

When REINZ-Dichtungs-GmbH in Neu-Ulm, a subsidiary of the US Dana Group, was looking for a partner to design a highly to fully automated production cell for the injection molding of rubber seals onto cylinder head metal plates, rubber injection molding machine manufacturer LWB-Steinl from Altdorf near Landshut was shortlisted. REINZ project manager Mario Bauer: “When looking for a partner, it quickly became clear to us that the list of companies with expertise in handling rubber-elastic moldings would actually be “short”. Ultimately, only LWB-Steinl remained. Their deciding asset was their subsidiary "LWB-Automation", founded in 2017 in Weinheim, Baden-Württemberg, and their impressive references which made us to start talks. And there was enough to talk about. Because our plan was to assemble up to 29 seals made of fluorine rubber on the through openings of the sheet metal blanks for motor oil and cooling water by injection molding, all at once in one injection molding cycle. But before that could happen, there was a lot to develop. It would be too long to retell the entire evolution history of the project. Only one thing: It took around a year and series of meetings with the LWB mechanical and automation engineering specialists, during which we gradually approached the fully automatic concept of the production cell. In retrospect it was impressive how the production cell could be simplified and the cycle time reduced with each session. Ultimately, we decided on a 6-axis robot with an additional longitudinal axis as the central actor. Through it, all manufacturing operations from the sheet metal part takeover, insertion into and removal from the injection molding machine, the subsequent deburring by punching and the final visual inspection could be integrated into one overall process.

In the punching station, the overflow flashes are punched and removed

The decision of the project team to mold all the rubber gaskets onto the large-area cylinder head gaskets in one shot with a multi-nozzle cold runner had two major effects on the choice of machine. On the one hand it was the requirement for a high uniformity of the clamping force distribution on the pronounced rectangular injection molding tools, on the other hand the necessity allow for a maximum unobstructed access by the complex double robot gripper. Complex because of its twin-action concept for removing the finished part and inserting the steel plate. Based on this, the choice fell on a vertical injection molding machine with a frame clamping unit. Armin Stuetz, the technical director of LWB-Steinl explains the reason: “Thanks to the frame clamping unit, which we are in the exclusive position to offer, we were able to match the clamping surface and the heating plate size precisely to the injection molding tools. With a tie bar clamping unit, we would have to accept wider machine plates and consequently comparatively higher deflection values, which, in view of the seals distributed over the entire width of the steel plate, would have resulted in unacceptably high tolerances in the sealing profile thickness and the amount of flash. Not so with the frame-type clamping unit. Their welded construction in combination with two pressure pad closing modules is overall more rigid and dimensionally stable, which guarantees a higher plane parallelism under all load conditions. Finally, the selection process was concluded with a machine with the type designation LWB VRF 6000/160 dual with 6000 kN clamping force. "Dual" stands for two vertical 160 cm3 micro-injection units that inject a Fluoro-rubber mixture into the injection mold via two 8-fold cold runner systems."

In order to be able to quickly change the molds for the four size variants of the cylinder head gaskets produced in alternation, both the injection molding machine and the punching machine were equipped with tool changing devices.

A metal blank of the cylinder head gasket is inserted into the clamping unit by a robot, locally overmolded with rubber and then removed. The robot has a double gripper for this.

The jointly designed production cell combines all workstations in a rectangular configuration. The rectangular configuration resulted from the number of workstations that, due to their size, did not have space in the circular or spherical work area of the central 6-axis industrial robot. To cope with that, the robot was placed on a rail track (7th axis). That enables the robot to reach all the workstations in the square with a cycle time offset. The beginning and the end of the work sequence are in the middle of one long side together with an access lock for the operating personnel. These are the takeover and transfer positions for the insert parts (stamped sheet metal blanks) and the finished parts. From there, the robot takes over the insert parts, passing a thickness measuring station. The latter is to prevent that the robot could take over two parts sticking together by adhesion. The next step is to place the steel blank in a preheating station and then transfer it into the injection molding machine. After removing it from the injection molding machine, the robot transfers it to a cooling station, which is located diagonally across from the injection molding machine. The next work step takes place in the punching machine positioned next to it, where the overflows in the central area of the seals are punched out and discharged downwards out of the machine. After punching, the robot transfers the composite part to an optical measuring station, where all sealing areas are checked for dimensions and completeness. The final step after the approval is the handover to the finished parts rack, which closes the circle. All work steps are coordinated and monitored via a central process control, and all measurement results are documented.

Behind the central access lock are the storage bars for finished parts (upper two positions) and the transfer position for the inserts (below).

After the intense project planning, construction began in December 2019. In September 2020, the system had successfully passed all acceptance tests and was ready to be delivered. REINZ project manager Mario Bauer: “It was our first system-project with LWB-Steinl and therefore a risk with an uncertain outcome. But the risk was worth it, as the end result impressively shows. The decisive factor for success was, in particular, that throughout the entire duration of the project the intensive collaboration went beyond the wording of the order. Without that, the automation project would have been the initially feared risk with an uncertain outcome.”

Having the successfully completed all performance tests Armin Stuetz, the technical manager of LWB (left) and Mario Bauer, project manager at REINZ can look back on two-years of successful cooperation.

Dana is a leading manufacturer of top-quality vehicle technology solutions that it develops and produces under the Victor Reinz® brand. Dana supplies a full-service range of outstanding products on a global scale, including as sealing and shielding systems for the automotive industry; service parts for the open replacement parts market; gasket materials and special gaskets for industrial applications, alongside components for fuel cells.

REINZ-Dichtungs-GmbH is a subsidiary of Dana Incorporated and employs 1,000 people in Neu-Ulm, Germany. 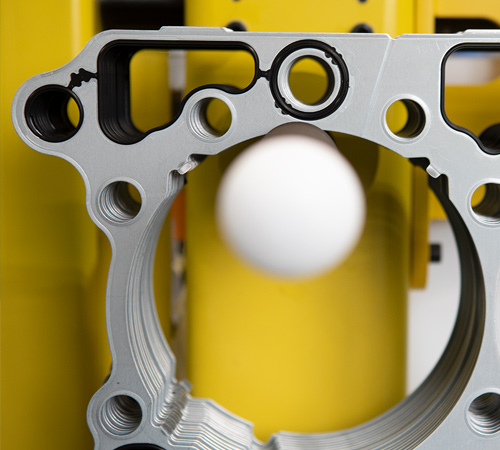 One of the four different cylinder head gaskets for 5- and 6-cylinder truck engines, with dimensions of up to 1200 x 250 mm, being produced on the system. 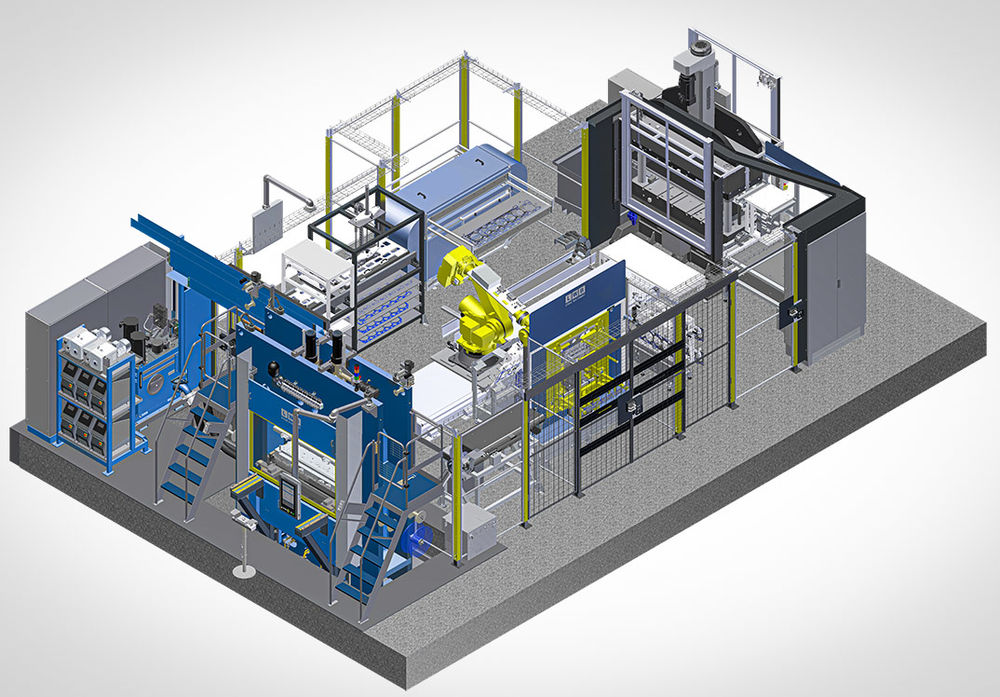 The production cell for the flexible manufacture of cylinder head gaskets of different sizes automates all work steps of the metal part manipulation before and after the injection molding machine including the after-cooling, deburring and quality control and documentation.